On to the Two-Year-Old Sales

The last of the big mixed sales -- Keeneland January -- has just ended, with the expected horrific results.  Only 213 of the 407 horses catalogued for Saturday, the final day of the sale, managed to find a new home, even at bargain-basement prices. The rest were either scratched or failed to meet their much-reduced reserves.
It's pretty depressing, actually, to look through today's results from Keeneland. Many, many horses going for $1,000 or $1,500. For the day as a whole, the average price for those that sold was $8,431 and the median a depressing $4,000.  I'd be surprised if more than a handful of the horses offered today did as much as break even for their sellers, after taking into account stud fees, the cost of raising foals, and sales-related expenses.
For the six-day sale as a whole, the numbers were truly awful.  The gross sales dropped by more than 50% from last year, to a puny $32.8 million.  And despite a continuing shrinkage of the catalog -- two years ago the January sale listed 2,933 horses, compared to only 2,379 this year -- the sale's average and median price also plummeted.  Average price for the 1,338 horses that actually sold this year was $24,532, down 48% from last year, and the median -- more reflective of where the true middle of the market is -- was $9,500 this year, down 44% from last year's $17,000.
While last September's Keeneland yearling sale sent out some early-warning signals, declining by some 20-plus percent, the fall and winter mixed sales have revealed that thoroughbred breeding is by no means immune to the nationwide financial meltdown.  While only a couple of highly visible people in racing have been caught up in the Bernie Madoff Ponzi scheme, lots more have apparently been so shaken by the collapse of the securities and credut markets that they're just sitting on whatever money they have left, and certainly not spending it on luxury toys like thoroughbreds.
The fall and winter sales have sent a signal that the industry needs to slim down. It is probably already doing just that. Even with stud fees reduced and flexible deals and terms being offered by many Kentucky stallion farms, demand for 2009 stallion seasons is reportedly very slow.  When most yearlings won't even sell for the stud fee, there's not a lot of point in rushing ahead into breeding.  If the 2010 foal crop is substantially reduced, as breeders take thousands of marginal mares out of production, we'll probably have a lot healthier industry when/if the broader economy recovers.
Meanwhile, though, there are a lot of important players who must be getting very worried. The breeders of the 2009 foal crop, for example. It's hard to see many of them making money on this year's foals, and many will be squeezed by the banks that they depend on to give them the credit that carries them to the next sale.
And then there are the pinhookers in Ocala, getting ready for the start of this year's sales season.  While many of them were a bit more cautious last September than in prior years, they still, as a group, have a huge investment at stake in their horses, and a shortage of buyers at the sales in March, April and May could devastate their business model.
Pinhookers buy lots of yearlings, push them through a tough basic training in Ocala to get them ready for the breeze shows at the spring sales, and hope a few of the horses are the "home runs" that can pay for all the rest -- the $75,000 yearling that sells for $1 million because it runs an eighth of a mile in 10.0 seconds. (Or, even better, sells for $16 million if, like The Green Monkey, the horse runs that eighth in 9.8 seconds, no matter that he did it in a rotary gallop that tells one nothing about how he'd stand up to training for real race distances.)
The buyers at the two-year-old sales are mostly folks who actually plan to race their horses -- what a concept! With purses flattening out as handle declines and costs increase, the economics of racing certainly aren't getting any better. Couple that with the severe, continuing shortage of credit, and it's hard to see that there will be a lot of enthusiasm on the part of prospective buyers at the spring sales. Sure, John Ferguson of Godolphin and Demi O'Byrne of Coolmore will probably show up, and every Ocala pinhooker is hoping to have the horse that gets the two of them into the kind of bidding war that produced a $16 million Monkey.
But if you don't have that horse, it could be a pretty rough sales season. A lot of the Ocala pinhookers are excellent horsemen and women, and many are genuinely nice people as well.  It's going to be a rough adjustment for some; they're the people who are stuck with an expensive inventory just as the market is going in the wrong way.  That's not often a recipe for success.
Posted by Steve Zorn at 10:11 PM No comments:

The Future of Racing? 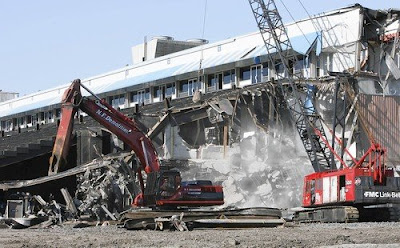 That's Sportsman's Park in Chicago, where demolition started yesterday, but it could be a number of other tracks in the not too distant future.  Racing needs to shrink, concentrate, and develop a focus. And that means that there won't be much of a justification for keeping a lot of tracks alive, as ever more betting shifts online.  This year's significant decline in handle, concentrated in the last few months of the year, will accelerate the process, inter alia by forcing Frank Stronach's Magna to sell of its tracks.  A year from now we may be looking at a very different industry.
Posted by Steve Zorn at 10:47 PM No comments: