NYRA's 2nd Quarter: All You Need Is a Triple Crown on the Line

Some interesting news out of the brief and Chairmanless NYRA Board meeting in Saratoga this morning. The fun started when reporter Jim Odato of the Albany Times-Union was prevented from entering because he'd allegedly failed to RSVP to the meeting notice. I didn't know NYRA had suddenly become so conscious of protocol and etiquette. Eventually, cooler heads prevailed, recognized that this was supposed to be an open meeting, and let in any reporters who wanted to attend, RSVP or not. But it was an interesting reoccurrence of NYRA's traditional arrogance, which seems to manifest itself no matter who's occupying the executive suite. 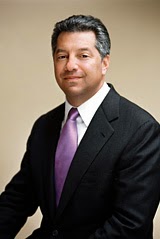 With real estate mogul Marc Holliday (pictured at right) joining the NYRA Board as a Cuomo appointee, replacing Jane Rosenthal, the Board is now entirely white and male. C'mon guys, even otherwise odious Fortune 500 companies can do better than that on diversity.

Two items of note out of the substance of the meeting. First, NYRA CEO Chris Kay got his $250,000 bonus (on top of a $300,000 base salary). After much resistance, NYRA had finally coughed up the information that the bonus criteria included (1) restoring NYRA to profitability, (2) enhancing the customer (oops, "guest") experience, and (3) assembling a strong management team. Pretty amazing that the Board could conclude already that those objectives had been met. The "return to profitability" is discussed at some length below, but here a a couple of thoughts on the other issues: First, how can the Board conclude that there's a strong management team when the new Chief Experience Officer and the even newer General Counsel have been on the job only a few months. True, the hiring of Martin Panza to run the Racing Department appears to be a huge improvement over the departed P J Campo's regime, but one would think that a bit more time might be required to evaluate the rest of the new management.

Second, while there have been some real improvements -- new TVs and tables at Saratoga, the at-long-last completion of the Longshots simulcast facility at Aqueduct, the food trucks at Belmont on July 5th, etc. -- I'm not sure everyone would agree that the customer experience is markedly improved. Especially the folks stuck in the parking lots or waiting for the LIRR to take them home on Belmont Stakes day. I would have given the jury a little more time to deliberate on that one as well.

But, so be it. We all knew that Kay's salary was really $550,000. All the NYRA Board did today was confirm that. And by comparison to the multi-millions that Churchill Downs Inc. pays its top executives, the NYRA number looks like a bargain.

On to the financials. The headline is that there was net income from racing operations -- not counting money from the Aqueduct slot machines -- in the second quarter, in fact, some $5 million of it, compared to a loss of $1.7 million in the same quarter last year. Thus, technically, NYRA has been restored to profitability, a key component of the task that the State has set for the current Board and CEO. But, as we'll see, that profitability depended on one fact -- the possibility of a Triple Crown being won in the Belmont Stakes. It's great that NYRA has in fact improved its financial performance, but it's still a long way from predictable profitability year in and year out.

True, this year's Belmont Stakes Day featured an enhanced card, including the Met Mile, that would probably have increased handle over last year even in the absence of a Triple Crown bid, but probably not enough to make NYRA profitable for the quarter. Here are the numbers:

Total handle for the quarter, both on- and off-track, was $699 million, of which $154 million was wagered on the Belmont Stakes Day card. Last year, without a Triple Crown bid, total handle for the quarter was $677 million, of which $91 million was bet on Belmont Stakes Day. Taking into account the different takeout rates and different splits between NYRA and the various outlets that take bets on its simulcast signal, NYRA earns roughly 9.7% of the total amount bet, of which roughly half goes to purses and breeder awards and the rest stays with NYRA, for operating funds and capital expenditures. So, applying those percentages to the gross handle numbers, handle on the Belmont Stakes card was up $63 million this year, compared to last year, which translates to about a $4.4 million increase to NYRA's bottom line. Handle for the rest of the second quarter, subtracting Belmont Stakes Day, actually declined from $586 million last year to $545 million this year. So, yes, NYRA showed a profit from racing operations this year, but that profit was more the result of California Chrome's Triple Crown bid than of the changes that the new NYRA management team has made. Outlook for the future, IMHO, precarious.

The (unaudited) financials distributed for today's NYRA Board meeting do contain some bright spots.  NYRA largely held the line on labor costs, with a $648,000 savings on permanent payroll, compared to last year, being offset by a $674,000 increase in the budget for temporary help on Belmont Stakes Day. Legal fees paid to outside firms, long a NYRA boondoggle, declined by over 50%, to $392,000. And consulting expenses declined by 20%, to $549,000. Marketing expenses also dropped in half, from $1.6 million last year to $800,000 this year, as NYRA let California Chrome's news coverage do a lot of the marketing work. Again, without a Triple Crown on the line, this might not be a recurring savings. Repairs and maintenance, on the other hand, increased from $1.7 million in the second quarter last year to $2.5 million this year; that's probably a good thing, as there's still a maintenance backlog at all three NYRA tracks.

As for the slot machines, they just keep clicking along, with the average daily profit per machine at the Resorts World casino at Aqueduct now at $450, by far the highest in the US. That translated into another $14.3 million for NYRA in the quarter, as well as a similar amount for the purse account. The result, a nice cushion, pushing overall operating income for the quarter to $19.4 million, compared to $12.4 million for the same quarter last year.

NYRA really is doing quite good job financially, especially when compared to the rest of the U.S. racing industry. For example, while NYRA ran only 4% of total U.S. race days in the second quarter, it generated 21% of total U.S. betting handle. Good work so far by the Racing Office, aided, of course, by the slots-sweetened purses, in putting together steadily more attractive racing programs. But perhaps its too early to conclude that the battle for profitability has been won. Let's see what happens in a year when we don't have a Smarty Jones, Big Brown or California Chrome.