The Breeders Cup is over. So let’s get on to the important stuff.  Which is that racing returns to Aqueduct on Wednesday.

Well, OK, perhaps Aqueduct isn’t the center of the racing world any more – though it did host the Breeders Cup in 1985 – but for some of us in the game, it can be the center of our economic, if not aesthetic, lives.

And for the New York Racing Association (NYRA), which operates the rusting old track on the fringes of , Aqueduct is, bizarrely, its most reliable profit center.  Sure,  and  have the famous races and, occasionally, draw the big crowds, but it’s Aqueduct that actually generates the cash.

For those who haven’t had the pleasure of spending quality time at the Big A, here’s a video clip that can give you a bit of a feel for the ambience. True, the clip is 40 years old, and the crowds are a lot smaller these days, but some things never change.

The original Aqueduct track opened in September 1894. At the time, long before there was an airport there, the area was farmland, and still independent of .  In 1941, a new clubhouse and track offices were built. The whole plant was razed in 1956, just after the New York Racing Association was formed, consolidating the then-four major tracks into a single entity, and a new "Big A" opened in 1959.

That new Big A is now approaching 50, and its age is showing.  The plant that held over 40,000 for the Breeders Cup back in 1985 now draws an average weekday “crowd” of perhaps 1500.  The cavernous grandstand has been closed off for years, awaiting the installation of slot machines that were approved by the New York State Legislature in 2001 and are, at latest report, going to be ready – perhaps – by 2010. Unlike most tracks that operate in the winter, Aqueduct has no indoor seating from which to watch the races.  If you want to see them live, rather than on a TV screen, you have to venture out into the often-frigid box seat area, where the paint peels from the iron rails, and feeble electric heating elements shine a dim yellow light that one can pretend has some warmth in it.

But, to look on the bright side, Aqueduct is the only track in  that has its own subway stop. In fact, you can stand on the subway side of the clubhouse and see the skyscrapers of Wall Street in the distance. The folks betting the daily double are probably doing better these days than those guys in the skyscrapers

And don’t forget the racing itself. In 1975, an inner track, which miraculously resists freezing, was built to accommodate winter racing. Once the horses move to the inner track – usually from December through March – there’s no turf racing, and the distances are a relentless parade of 6-furlong, 1 mile 70 yards and 1 1/16th miles, with a few longer routes thrown in very occasionally for variety.  The intrepid handicapper gets very accustomed to seeing the same horses, in pretty much the same conditions, running against each other every other week. From a handicapper’s point of view it’s pretty ugly; the inner track is relentlessly speed-favoring, especially when it’s wet (which is often).

On the bright side (at least it’s bright if you’re a very young rider), most of the top jockeys head south for the winter, so there’s almost always room for an unknown apprentice or two to break through into the standings, a pattern that’s helped along by the speed bias.  Trainers put a 105-pound bug boy (or girl) on their horse and tell them to just pop out of the gate and hold on.  If the horse is fast enough to clear the field, and the jock doesn’t fall off, they’re on their way to the winner’ circle.

In an ideal world, you might think, Aqueduct would just go away, we’d race at Belmont from, say, March through July, go the summer camp for racetrackers, i.e., Saratoga, for August, then back to Belmont through maybe Thanksgiving.  And, in the winter, horses could go to beautiful old or Gulfstream, or just take a few months off and frolic in the pastures of .  Oops, John Brunetti’s intransigence and the demographics of South Florida seem to have doomed , and Gulfstream is no longer either old or beautiful.  And most of us who own horses can’t afford the luxury of a winter vacation.

Certainly there have been attempts from time to time to close the place.  To understand why it endures, and why some even love it – well, perhaps love is too strong a word; how about have a secret, well-guarded fondness for it – one needs to understand the crucial role that Aqueduct plays in the economics of New York racing.

There are four different interests whose need Aqueduct serves very well: (1)   and its politicians; (2) NYRA itself; (3) owners and trainers who race in ; and (4)  thoroughbred breeders.

First, the state.  Since  takes a very big cut from the betting dollar, has mandated that NYRA run many, many racing days each year. These days, the Aqueduct “season” runs from late October through the end of April, with only an 11-day break at Christmas.  The rest of the time, the live racing show must go on.

Second, there’s NYRA.  Strange as it may seem, NYRA makes a profit at Aqueduct.  Sure, on-track attendance is low, and so is on-track handle. But the Aqueduct simulcast signal, sent through the statewide network of OTBs and to virtually every pari-mutuel betting outlet in , brings in much appreciated dollars. At the same time, purses are much lower than at and .  Hardly any of those pesky Grade I stakes that cost the track money, but there are lots of NY-bred maidens and allowances, and lots of low-level claiming races, with appropriately low purses. Generally, NYRA breaks even, more or less, at  – huge handle, but correspondingly huge purse distribution – and loses money at the meets, which don’t have the huge attendance, but do have lots of rich stakes races.  This year, NYRA has cut back Aqueduct purse levels by 10%, so even with an expected decline in handle, there should still be a profit.

Third, Aqueduct is the savior of the average working horseman.  When the big outfits, with their million-dollar yearlings, roll into town for the summer, it’s pretty hard for a small stable, with modestly priced horses, to compete. But when we move to Aqueduct, all of a sudden there’s room in the winners’ circle. As Pletcher, Zito, McLaughlin et al. head south, the rest of us begin to see spots in the condition book where we can compete.  (My own modest stable, Castle Village Farm, was leading owner at the Aqueduct spring meet in 2006, something we’d have no hope of accomplishing at, say, Saratoga.) Stables that have lots of New York-breds tend to do particularly well at Aqueduct, because the racing secretary needs to fill races, and there are lots of NY-breds at the track, so there are often four or five NY-bred races on a nine-race card. And those races draw full fields, which makes NYRA and the state happy as well, since betting handle is pretty much proportionate to field size.

Finally, because of its reliance on NY-breds, Aqueduct is a major force propping up the  breeding industry.  Thanks to the efforts of horse owner and retired State Senate majority leader Joe Bruno,  has one of the richest state-bred programs in the country, with substantial bonus payments to the owners, breeders and stallion owners of NY-bred winners. For a good-sized breeding farm, those bonus payments are like annuity checks, rolling in every two months.  Without the heavy diet of NY-breds running at Aqueduct, a lot of those farms wouldn’t survive.

So I don’t see Aqueduct fading away any time soon, no matter how much the NY Port Authority would like to grab the land for airport parking.  Neither the state, nor NYRA, nor a good portion of the horsemen could survive a long winter break.  And , where the grandstand faces into the north wind, and there’s virtually no heating, would require a billion-dollar makeover to handle winter racing.  So that leaves Aqueduct as the only feasible winter track.

But the old decrepit Aqueduct that we have such an intense love-hate relationship with may, finally, be in for a change.  After years of delay, the politicians have at last agreed on an operator for the (as yet totally imaginary) 4,500 slot machine palace at Aqueduct.  The lucky company is Delaware North, which also runs the slots at the Saratoga Harness track and at Finger Lakes, the only  thoroughbred track that’s not part of NYRA.  Construction may finally get under way any day now – well, more likely sometime next spring.  And after that, it’s mere months, well perhaps 15 of them, until the slots are in action and the profits are flowing, in distinctly unequal shares, to the state, Delaware North, NYRA and, finally, purses for the horsemen. (Oh, and the breeders, connected as they are in , get a share too.)

Delaware North has, in fact, put forth a vision of the new and improved Aqueduct, complete with a convention center, hotel, shops and restaurants (gee, sounds almost like Frank Stronach’s fiasco at Gulfstream; let’s hope not): 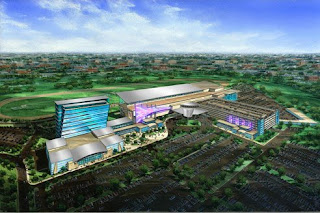 Any resemblance between that drawing and Aqueduct past, present or future is, I’m sure, purely coincidental.  But it’s nice to dream.

Meanwhile,  my NY-bred filly Just Zip It is entered in the feature race on Thursday. I can hardly wait.