Some Thoughts on the End of the Road

Hmmm, it's been a long time between blog posts. Guess that's what an overdose of Twitter can do to you. New Year's resolution for 2014: don't try to do in 140 characters what takes 800 or more words to get right.

Hence, this piece on how to prevent the thoroughbreds we love and who run their hearts out for us from ending up dead on the race track or in the "kill pen" at auctions for horses bound for the slaughterhouse. Thanks to the efforts of a dedicated band of volunteers, many thoroughbreds have been rescued from the auction pens at New Holland, PA,  and throughout the country. The horses that aren't rescued, though, go through some pretty hellish ordeals. A good description of the process is available from the Humane Society of the US, an organization that I disagree with on many issues, but am in total agreement on this one. 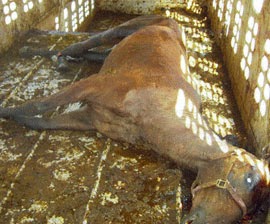 On the way to slaughter

For those of us in the thoroughbred racing world, perhaps the most abhorrent aspect of horse slaughter is the way that so many hard-working, previously successful race horses eventually make their way down the racing ladder, in some cases from Grade 1 stakes to $4,000 claiming races. These horses have more than earned the right to a second career, or just to a comfortable retirement. Whether we pay $5,000 or $5 million for them initially, we all have an obligation to see that they are decently cared for.

Horse slaughter for older horses that can no longer pay their way on the race track is only part of the problem. When horses die on the track, or are vanned off and put down out of public sight, that also reflects on all of us in the business. Sometimes, the death of a horse on the track is just an accident, but sometimes, it's the result of pushing a horse too hard, trying to get just one more race out of him.

So, how to get a handle on dealing with these two separate but related issues? Let me start by telling a story.

Last August, my little partnership, Castle Village Farm, claimed a five-year-old chestnut NY-bred gelding, East of Danzig, at Saratoga. We took him for $20,000 out of a turf race for horses that, among other conditions, hadn't won on the turf in the past six months. East of Danzig still had his NY-bred N2X allowance condition available, but hadn't run quite fast enough to be competitive at that level, which is why he was in for a claiming tag. We, like all owners eternally optimistic, were hoping we could get that allowance win. But in fact, East of Danzig was exactly what he looked like on paper -- a solid, hard-trying horse that ran ultra-consistent speed figures and tried every time, but that was just a step too slow to move up. So we entered him back at the same $20,000 level three times, earning a third, a second and, on October 13th at Belmont, a win. But in that October 13 race, he was claimed by trainer David Jacobson, who in the past few years has come to dominate the New York claiming scene. Seemed to me to be a not-so-smart claim, since East of Danzig is a pure turf horse and the turf season was winding down, and since his speed figures clearly showed that it was unlikely he'd get faster at age 6 and get that NY-bred allowance win. But Jacobson has made what seemed to be pretty silly claims from us before, taking Castle Village Farm's stakes winner Introspect for $50,000 (we later retrieved him and raised $10,000 so we could retire him) and taking our stakes-placed sprinter Southern Missile for an absurd $75,000, both in 2008.

In any event, after Jacobson claimed him, East of Danzig disappeared from the workout tab for over a month, only to appear in the entries at Laurel in a $5,000 claiming race on the dirt on December 11th. Our partners were ready to claim him back out of that race and either rest him over the winter for the 2014 turf season or, if necessary, retire him. As it turned out, he was claimed by Maryland-based trainer Mary Eppler, who appears to understand that for $5,000 she got a pretty good and always hard-trying grass horse. I expect to see East of Danzig in the entries, on turf, this coming spring, at a level that more accurately reflects his value. 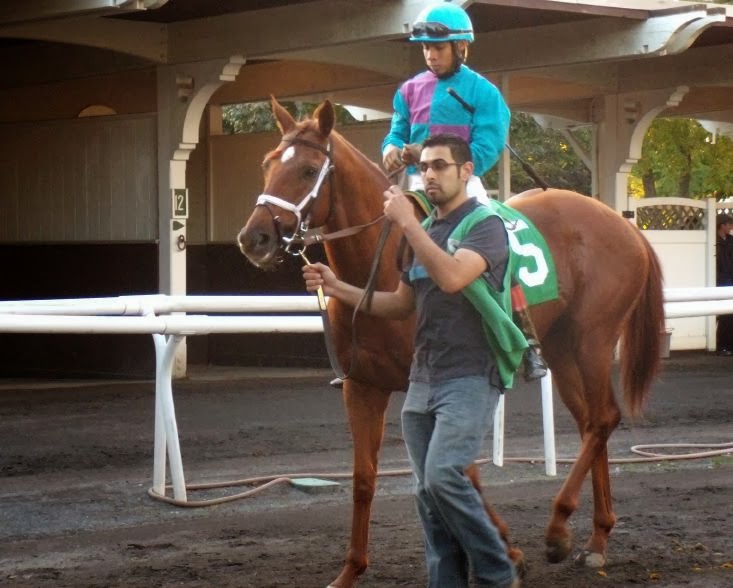 East of Danzig at Belmont

So what's the point of that story?

First, it illustrates a well-documented pattern in which Jacobson and other claiming trainers ship horses out of New York to lesser tracks, where it's harder for the horses' former owners to keep track of, and, if needed, rescue them. For Jacobson, these dumping grounds are Laurel and Suffolk. For other trainers, they may be PARX, near Philadelphia, Finger Lakes in upstate New York, or Charles Town and Mountaineer in West Virginia. Once, we even found one of our former horses running for $2,500 at a place called Mount Pleasant Meadows in Michigan (fortunately, a rescue was arranged there as well). Many of the horror stories of stakes-quality horses falling from grace and ending up breaking down on the track come from these lesser ovals, where perhaps veterinary supervision is less stringent than, say, at NYRA, or where purses are so small that trainers feel compelled to run their horses every 10 or 14 days, even if the horse in't sound enough to stand that workload.

Second, it illustrates a pattern of perverse incentives that can reward a trainer for dropping horses in class, even as the drop penalizes the owner. To my knowledge, Jacobson's arrangement with his principal owner, Drawing Away Stable, has these perverse incentives. Here's how I'm told it works: Drawing Away partners provide the funds to claim horses, but pay no ongoing training bills. In return for taking care of the horse, Jacobson gets something like 65% of the purse (I'm not sure of the exact percentage; Drawing Away partners should feel free to correct me with accurate figures.) In contrast, the more normal arrangement, at least on major-league racing circuits like New York, is for the owner to pay the training bills (in New York, $90-125 per day, plus at least several hundred dollars per month in vet bills), and for the trainer to get 10% of the purse. Thus, because Jacobson, and those like him who make similar deals with their owners, bear the cost of feeding and caring for the horse, but bear none of the capital loss if the horse is claimed away for less that its purchase price, and because Jacobson and similar trainers keep a large percentage of the purse, there's every incentive to drop a horse to a level where it's (relatively) sure to get a big chunk of the purse. And there's an incentive, again based on the cost of caring for the horse vis-a-vis the purse, to run a horse as often as possible. So, most of the time, that's how Jacobson and similar trainers play the game, often to the detriment of the horses in their care.

I'm not trying to limit this problem to Jacobson; other trainers have similar deals and therefore face similar perverse incentives. But Jacobson has the most horses, and the most reported problems, so he is the face of the issue. Two of his horses, in particular, have produced a firestorm of comment, some rational, some not, on Facebook and Twitter in the past few days.

First, well-know horse owner and lawyer Maggi Moss raised questions about Toque, a horse claimed by Jacobson last March for $25,000, then raced at Monmouth for $5,000 in May and Suffolk for $4,000 in June and then vanished from sight. Ms. Moss's tenacity uncovered the fact that Toque then appeared at the New Holland kill auction in September, only to be "bailed out" by the rescue broker AC4H, but subsequently died.

Second, the 7-year-old gelding Uncle Smokey, a horse with a history of unsoundness,  broke down and was euthanized on the track at Aqueduct on January 2, after making his third start in 15 days and sixth in 61 days.According to some who were at the track that day, Uncle Smokey was definitely sending signals that he didn't want to race.

Other trainers send out horses that probably shouldn't be racing, and other trainers have had horses die on the race track. But when a trainer who has just set a new record for wins at NYRA in a calendar year, and whose horse fill more spots in NYRA starting gates than any other starts seeing horses die or end up at the killers, it's appropriate that the spotlight shines in his direction. The same thing happened to Bob Baffert when his barn experienced a spate of cardiac arrest deaths. Leading trainers are big boys; they should be able to bear public scrutiny.

Jacobson, like virtually all other trainers, has lost horses to accidents that probably couldn't have been avoided. The stakes winner and crowd favorite Saginaw took a bad step at Saratoga and was euthanized after breaking down on the track on August 20th last year. There's no hint that he was over-raced, or that Jacobson gave this high-performing horse anything but the best of care. Similarly, the lightly raced 4-year-old colt Coronate threw his rider at Aqueduct on December 26th and fatally injured himself trying to jump a fence. Bad things happen in racing. Not all of them are a trainer's fault.

For those of us who love horses, it's beyond upsetting when a race horse dies on the track, or when a thoroughbred that has given years of effort to its owners ends up in the kill pen at New Holland. So what can we, as owners and fans, do to mitigate the problem?

First, we can all support the burgeoning efforts within the industry to provide second careers or dignified retirement for horses that are no longer on the track. The Thoroughbred Aftercare Alliance is an industry-wide group, whose Board includes important owners, breeders and trainers, devoted to funding thoroughbred retirement and ensuring that retirement facilities meet basic standards. Numerous groups already exist to provide retirement options, including CANTER, New Vocations and New York's own TAKE2 program (disclosure: I'm a member of the Board of Directors of the New York Thoroughbred Horsemen's Association (NYTHA), which sponsors the TAKE2 program, and NYTHA President Rick Violette is on the Board of the Thoroughbred Aftercare Alliance.)

Second, if one owns horses, even as a partner in a large group, it's important to do whatever one can to protect their welfare. Don't let them slip out of sight.

Third, put pressure on race tracks and regulators to enforce existing rules. NYRA and other tracks have rules that bar trainers who let their horses go to the slaughter auctions. But those rules seem rarely to be enforced. Writing to track executives and state regulators urging quicker, more consistent enforcement of the rules will certainly help move the issues up on those folks' agendas.

My apologies for the length of this, and for the unusually personal tone, but the spate of bad news about horses over the past few weeks just struck a nerve.