Taking Care of Our Horses: Make the Pledge

Thanks for all the comments on my recent post about saving thoroughbreds from the kill auctions. It's clear that there's a huge community of horse owners and racing fans who believe, as I do, that we have an obligation to take care of the horses that give us so many thrills on the track.

Much of the discussion in the past few days, here and on Facebook, has been directed in particular at public racing partnerships -- groups that own horses and that seek funds and partners from the public at large. These partnerships differ from those like Sackatoga Stable, the owner of NY-bred Kentucky Derby winner Funny Cide, that are formed by a group of friends and that don't solicit widely for new members.

Since Dogwood's Cot Campbell invented the public partnership concept way back in 1969, partnerships have become an important force in the industry. From the high-end groups like Dogwood, Team Valor, Centennial or West Point, where the minimum partnership share is $25,000, $50,000 or more, down to the blue-collar groups that focus primarily on claiming horses, like Drawing Away Stable and my own Castle Village Farm, where a minimum share may be $1,000 or less, these partnerships have filled a gap caused by the falling-away of other, more traditional forms of individual and family ownership.

To give some sense of the importance of these partnerships, here are the partnership groups that have run at least two horses in New York since the start of the Aqueduct fall meet at the beginning of November, 2013:

In a class by itself, with 119 starts: Drawing Away Stables.

Many of these groups, especially the more expensive ones, are active all over the US and internationally, and so their New York starts are only a small piece of the picture. And many other groups are active in other regions. So the New York statistics are only a part of the whole, but they're the part I know and feel able to comment on.

Individual horse owners often commit to take care of their retired horses or find them safe retirement homes. Because racing partnerships are so visible, it would be an important advance if all partnerships would commit to a code of conduct with respect to their horses. Here are the elements of a code that, based on my experience, I believe to be affordable and fair, both to partners and to or horses:

FIRST, set aside a portion of the partnership's funds for equine retirement. (At Castle Village Farm, we set aside 3% of each partnership's initial capital and 1% of purse money.)

SECOND, if a horse owned by the partnership needs to be retired, commit to finding that horse a safe, secure placement -- don't just "give it away to a friend."

THIRD, if a horse is claimed away from the partnership, let the new owner know that you're always available to take the horse back if it needs to be retired.

FOURTH, follow your former horses' careers and, if they look like they're in trouble, take the initiative and go rescue them.

It can be done; I've gone to Finger Lakes with $4,000 in cash to get a horse away from the track before he broke down, and both Castle Village Farm and the horse's breeder, Meg Carrothers, followed our old warrior No Bad Habits as he reached the lower claiming levels, with Meg eventually claiming him for $4,000 at River Downs. And here he is just last week, enjoying retirement in Florida at age 20: 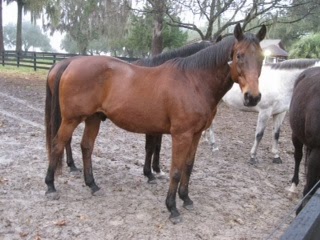 Most partnership web sites don't talk much about thoroughbred retirement. That doesn't necessarily mean that they don't have a policy, but it's discouraging that the issue isn't mentioned.

So, if you're a partner in any of these public racing partnerships, or if you know someone who is, let's step up the pressure and get all those partnerships to commit to decent retirement policies. If other partnerships will join us in to the four points listed above, I'd be delighted to do whatever I can to make their good works known.
Posted by Steve Zorn at 11:38 AM